I decided to build a new VMware host for my home “lab” last week to replace the HP workstation I had been using. (The real motive was to turn the HP workstation in to a large NAS since it has 12 SATA ports on it, but more on that later.) So off to part out my new server. What I ended up purchasing was the following (Prices as of 3/24/2015 in USD):

The plan was to set this system up with VMware vSphere 6 and then migrate everything from my VMware 5.1 system to this. So I began building it as the parts arrived last friday night. Everything was going swimmingly until I forgot that the LSI2308 SAS/SATA RAID card doesn’t have any cache. What I found was that the 2 480GB SSD drives in a RAID 1 on that card were fast, extremely fast, as in I could boot a Windows 7 or Windows 2012R2 VM in about 3 seconds. However the 2 2TB SATA drives that I made a RAID 1 on there were slow as hell. (Same as the issue I was having with the HPXW8600 system.) I had originally thought it was just the RAID rebuilding, so I left it at the RAID bios over night rebuilding the array.

Well after leaving it at 51% completed and going to bed, waking up 8 hours later and it was only at 63%, I knew that I would never be able to use the SATA drives as a hardware mirror on that device. So I powered it down and disconnected them from the LSI2308 and moved them over to the Intel SATA side of the motherboard. This is where things get interesting, as I really wanted to have a large 2TB mirrored datastore for some of my test vm’s that I didn’t run 24×7 (the ones I do are on the SSD RAID 1.) In order to achieve this I had to do some virtualization of my storage…

The easiest way I could get the “mirrored” datastore to work was to do the following:

Now comes the part that gets a little funky. Because I didn’t want the iSCSI traffic to affect my physical 1GB on the motherboard I created a new vSwitch but didn’t assign any physical adapters to it. I then created a VMkernel Port on it and assigned the local vSphere host to it with a new IP in a different subnet. I then added another ethernet (e1000) card to the FreeNAS VM and placed it in that same vSwitch and assigned it an IP in the same subnet as the vSphere host.

With the networking “done”, it is now time to add the iSCSI software adapter:

You should now have a new iSCSI datastore on the 2 disks that were not able to be “hardware” mirrored. Using HD Tune in a Windows 7 VM on that datastore I got this: 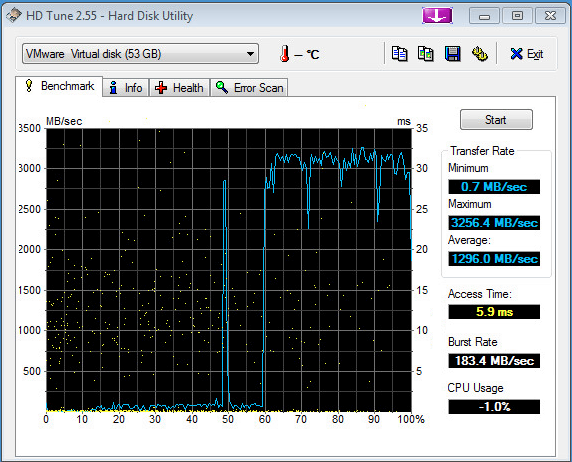 As you can see, the left side of the huge spike was actually the writing portion of the test, which got drowned out by the read side of the test. Needless to say the cache on the FreeNAS makes it read extremely fast. As an example a cold boot of this Windows 7 VM took about 45 seconds to get to the login screen from power on. However a reboot is about 15 seconds or less..

Now on the FreeNAS side here is what the CPU utilization looked like during the test: 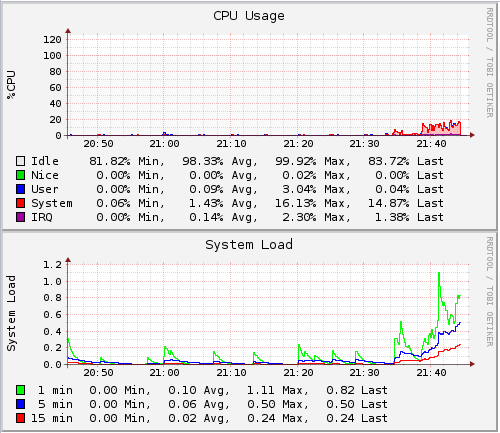 You can see that is barely touched the CPU’s while the test was running. So lets look at the disk’s to see how they dealt with it: 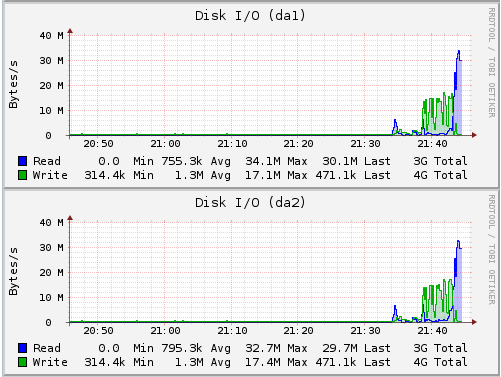 It looks like the writes were averaging around 17MB/s, which for a SATA/6Gbps drive is a little slow, but we are also doing a software raid, with cacheing being handled in memory on the FreeNAS side. The reads looked to be about double the writes, which is expected in a RAID 1 config.

The final graph I have from the FreeNAS is the internal network card:

Here we can see the transfer rates appear to be pretty close to that of the disk side. This is however on the e1000 card. I have yet to try it with the VMXNET3 driver to see if I get any faster speeds or not.

While the above may not show very “high” transfer speeds, the real test was when I was transferring the VM’s from the HP box to the new one. Before I created the iSCSI datastore and was just using the straight LSI2308 RAID1 on the 2x 2TB disks, the write speed was so bad that it was going to take hours to move a simple 10GB VM. After making the switch, it was down to minutes. In fact the largest one I moved, was 123GB in size and took 138 minutes to copy using the ovftool method.

So why did I title this post Cash for Cache, quite simple, if I had more cash to spend on a RAID controller that actually had a lot of cache on it, and a BBU, I wouldn’t have had to go the virtualized FreeNAS route. I should also mention that I would NEVER recommend some one doing this in a production environment as their is a HUGE catch 22. If you only have one vSphere host and no shared storage, when you power off the vSphere side (and consequently the FreeNAS VM) you will lose the iSCSI datastore (which would be expected). The problem is when you power it back on, you have to go and rescan to find the iSCSI datastore(s) after  you boot the FreeNAS vm back up. Sure you could have the FreeNAS boot automatically, but I have not tested that yet and to see if vSphere will automatically scan the iSCSI again to find the FreeNAS share.

Looking to the future, if SSD’s drop in price to where they are about equal to current spindle disks, I will likely replace all the SATA hard drives with SSD drives and then this would be the fastest VMware server ever.