Set out tonight to find a way to log “network traffic” through the interfaces on my solaris box. What I was wanting was the actually amount of traffic going through the interfaces. First thought was to use netstat. But that only shows “packets” and the packets could be differing sizes. So I ended up using kstat. I wrote this simple little script to grab the interface names, and then use kstat to get the data out of the network module for each card:

You have to be root to run this, but that is only because of the dladm command I am using on Solaris 10. If you don’t want to run it as root, then comment out the if statement and just leave the line that uses ifconfig. When you run it, it will produce an output like this:

The output is formated as hostname, ethernet, time of the run, sending bytes, and receiving bytes. (The time is the epoch time.) The above script will only run 800 times, pausing 10 seconds between each run of the kstat. You can change how long it runs by changing the line:

Just change the 800 to some other number. The second item to change is the “interval” time and that is controled by the :

You probably don’t want to run this every second. Every 10 is about right, as it will allow me to get the traffic with out much overhead.

The second script I did, was a little php script (but can be done in probably any language, but I use php for just about everything. This script takes output from the file you created above (just run the above script, redirect it to a file) and gives you a human readable output.

Note if you have more than one ethernet card active in your system, currently you will need to
“grep” out each card to it’s own file. If you have a bunch of machines, you should probably import the data from above in to a mysql db, and then modify this script to pull the info from it.

Here is the script to just parse one network card:

In the above, I named my redirected output to be Netstat.csv. What the above script outputs will look like this:

The output is : hostname, ethernet, time of query,sending speed in Mbps, receiving speed in Mbps. As you can see from the above, I was copying some large amounts of data.

If you are using Solaris 10, and you have not used bart yet, you should stop everything and take a look at it.

For those who don’t know what bart is, it is the Basic Auditing and Reporting Tool that is in Solaris 10.

In a quick synopsis bart will create a report that shows all files/directories on a solaris machine. This report contains the permissions, owners, sizes, modify times and md5 hashes of all files on the system, along with acl’s if you are using ZFS.

So why is bart so important? First, it can be used as a security tool. When you install a new Solaris 10 system, the first thing you should do after you get it installed and patched and before it is placed on the network is run a bart on the system and save the report to a cd. This will be the “baseline” image of the system. Then every week/month you should run a bart against the machine again and then use the compare option to see what files have changed, added or deleted from the system. Where this comes in really handy is if your think that your machine has been hacked or compromised. You can use the comparison to determine which files may have been modified by the hacker.

But there is a non-security use for bart as well that is VERY useful. This use is one that I had not thought of until I needed it the other day. So what is this use? Reseting the permissions on files that were accidentally changed by an in-experienced UNIX person thinking that a “chmod -R 777 *” is the best way to fix their problems.

The first thing that came to my mind when I saw this happen was oh no, the machine had not even been backed up yet, and a day’s worth of work would have been lost. Even if the machine had been backed up, do you realize how long it would take to restore a file system with 40,000+ files, just because the permissions were screwed up. ( Note, the permissions on the various files were very different and even included some setuid, and setgiud files which were wiped out as well.)

So how did bart save the day? Luckly I had taken a bart of the machine before the work had begun on the file system. So after the chmod command was issued, I then took a bart of the file system again. I now could run a bart compare against the control and test manifest and see exactly what all had changed.

Once I had this output, I could then create a script to change the permissions of the files/directories back to the original values. All told after I finished tweaking my script it took about 20 minutes to reset the permissions on all the files and directories.

So here is a quick start to getting your first bart manifest of your system:

1. Create a bart_rules file. If you do not create a rules file, your output will only have Files and not directories listed in it. My simple bart_rules file looks like this:

/
CHECK ALL
/home
IGNORE ALL

I ignore the /home file system as in my case it was nfs mounted. In reality you would want to include all local file systems.

2. Create the bart, I keep the rules file in /root/bart_rules so I would run the command:

This will create a bart manifest and output it to /tmp/bart.output. Looking at the first couple of lines of it looks like this:

Looking at a file in particular we see this:

In the above, we see that the file is 10 bytes, has a permissions of 644 and is owned by root/root.

Now suppose that I for some reason by accident was in the /httpd/htdocs directory and did a chmod -R 777 *. Since I had my control manifest, I would then run another bart and then use the compare option. What I would get is something like this:

Here we can see that the permissions has changed from 644 to 777. But the output is not really easy to parse with a script. So we need to use the “-p” option on the bart compare:

here are some other examples:

Here is another example of the index.html file above, after it had been edited:

Once again this is in the “human” readable format, the “machine” readable looks like :

(the above is actually all on one line.)

Once you have the output of the bart after the “oops” you will need to run the bart compare with options to ignore some items. Since I am only interested in the mode, the size, mtime and contents can be ignored. I used the following:

This only shows files that have had their mode changed:

You should redirect this output to a file, so that it can then be used to generate a script.
With the output in a file I then did this:

So basicly I cat the file and print the chmod command allong with the 3rd field (100644) and then the first field (/httpd/htdocs/index.html) and redirect this to a new file. Once I spot check this file, you can then run it and it will “reset” the permissions back.

Now everything I have shown above is based on the machine having a UFS file system. If you run bart against a file system that is ZFS, you will get a manifest that looks something like this:

It shows the ZFS extended acl’s.

So if you haven’t started using bart, you should start as soon as possible.

I was working on a shell script last night and needed to calculate the value for yesterday. I did not have access to GNU date, so using that is out of the question. All I could use was what was available to me in a default install of Solaris 10. So I decided to use Perl as such (note that the YESTERDAY should all be on one line):

What this will do is store the value of yesterday in a shell variable called YESTERDAY
Now I have not done perl in a long while so here is an explanation of what it does:
1. Runs the perl function time which will find the current time, then subtract 86400 from it (24 hours).
2. Next it is run through the localtime function which creates an array that has the following values:

Hope this helps some one else.

Today I needed to see what patches were missing on a ton of machines. Instead of trying to start the Patch manager of the month for solaris, I wrote this little script that would produce me a HTML page of the current patches installed and ones that needed to be installed. This script is based off of the patchdiag.xref available from Sun. I know there are many other tools out there such as PCA (Patch check advanced) but in the environment I was in today, I could not use any third party programs so I wrote my own. The output looks like this: 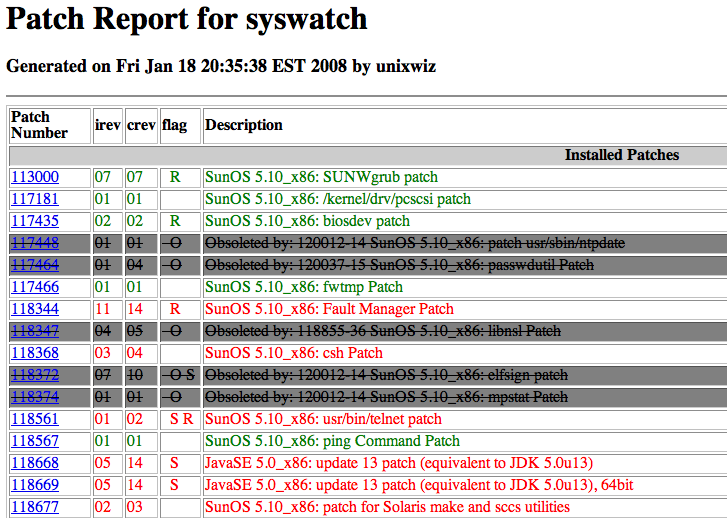 What the script does is the following:

Basically it is a very simple script. It should work on all versions of solaris from 7+. It ONLY looks at Solaris specific patches and not those that are unbundled (i.e. Sun Studio, Web Server, etc.)

Here is the script, it may not be the cleanest or most efficient, but it was a quick job…