Just released, another exploit to Internet Explorer 6 & 7, that allows “hackers” to install software on your machine… What do the major Antivirus people say:

“To minimize the chances of being affected by this issue, Internet Explorer users should ensure their antivirus definitions are up to date, disable JavaScript and only visit Web sites they trust until fixes are available from Microsoft,” Symantec said.

How many mom and pop’s out there even know how to disable java script, and only visit sites they trust? Let alone make sure their antivirus definitions are updated. I have seen some virus trick Symantec’s AV in to thinking the definitions were up to date, and then I go to find hundreds of virus’ on my parents computer. This is just another reason why building the web browser in to the OS is a bad thing and why it should be sandbox’d off in to its own little area.

Has any one else seen this problem? Using a MacPro with Snow Leopard 10.6.1 on it, and it seems like everytime I go to shutdown the Mac (using Finder and holding Alt and clicking on shutdown) it shuts down, but then a second later it starts back up. (almost as if it was doing a reboot instead of a shutdown. When the login screen shows up, I click the shutdown and it shuts down and doesn’t restart. Any suggestions?

I received my copy of Snow Leopard today from Apple. They overnighted it and fedex was kind enough to call and tell me they tried to deliver it but was unable to. I stopped by the Fedex depot on the way home and picked it up. I decided to load it on the Laptop first because I have heard of some problems with Adobe Photoshop Elements (which I run on the Mac Pro desktop).

So what are my thoughts:
1. I think Apple shipped some faulty DVD’s. Everytime I put it in my MacBook Pro, it would try to read it and then it would eject it. I put it in the MacPro desktop and it came right up. So back to the MBP and it continued to just eject it. I then attached an LG External USB DVD drive, and it seemed to have some problems reading it on there. I then did the Apple Software update (there were a couple of Security alerts available) thinking that may help. Didn’t appear to. Then all of the sudden it loaded the installer. After an hour later and 2 reboots Snow Leopard was installed via the USB drive. They still need to work on their installer, it set at the “Time Remaining : Less than a minute” for over 10 minutes.

2. The initial startup seemed to take some time, but have not tried rebooting it yet.

So far I havn’t tried any of the other apps I use, but Adium X 1.4b9 seems to run well. I also like the new Expose, seems to organize stuff a little better. Will have to see what else has changed.

What a difference more memory makes in the mac pro……. 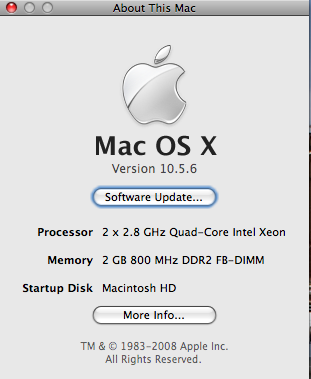 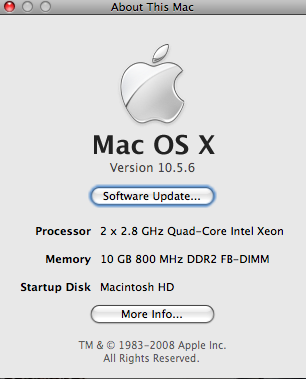 Pretty darn snappy now, and vmware does not page as much when doing things in “windows”